Over the past month I posted about the endgame in cape-and-sword roleplaying games, the point in a campaign at which the player characters become authority figures in the game-world, where conflicts transition from the physical to the political and power comes from one's position at least as often as from one's sword arm.

Earlier posts focused on resources the adventurers may bring to bear as they reach the endgame: social standing and influence, wealth, contacts and favors, clients, and strongholds. These are the tools the adventurers acquire or build as the campaign progresses toward the endgame.

Recently I started posting about the endgame from the referee's perspective, beginning with the importance of action in the endgame. Now I want to turn to setting the stage for political adventures.

Awhile back, I drew the analogy of a cape-and-sword sandbox to fantasy roleplaying 'dungeons' in which the 'rooms' are people and the relationships between them 'corridors.' Much like a party of adventurers in The World's Most Popular Roleplaying Game™ searching for treasure and encountering monsters, swashbucklers navigate a web of allies, rivals, patrons, lovers, and so forth, gaining rewards and facing hazards in the process. There are secret doors and passages to discover and traps and puzzles to solve - betrayal by friends with divided loyalties, unknown allies working behind the scenes - as well in this human 'dungeon.'

With that in mind, the ambit of planning for a cape-and-sword campaign that will progress toward the endgame as described here is akin to creating a megadungeon or 'campaign dungeon,' those interminable deeps which are designed to sustain months or years of actual play. For the cape-and-sword campaign, the megadungeon is the political milieu of the game-world, composed not of stone-walled rooms and corridors but of factions and alliances. 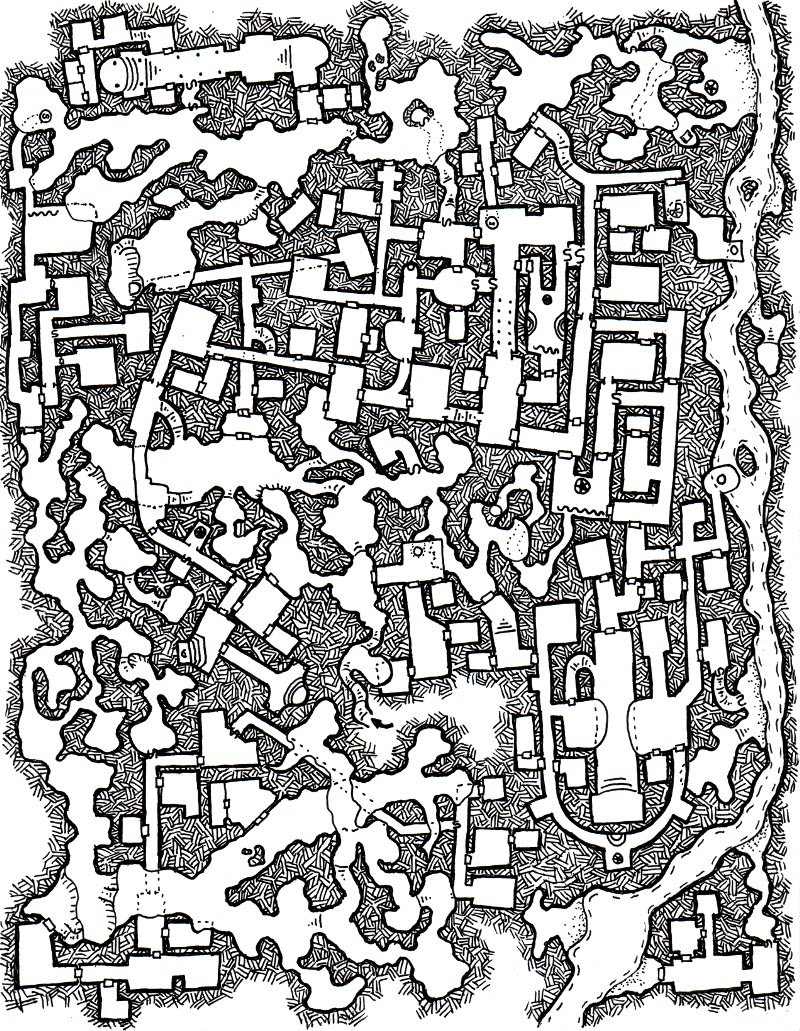 For some dungeon masters, the prospect of building a megadungeon is daunting in its scope, so I think it's important to take a moment and discuss how megadungeons may be put together. First, megadungeons don't need to be 'finished' before actual play begins. It isn't necessary to draw and stock sixteen or nineteen or twenty-four levels with scores of rooms each, most of which may take the adventurers months or years to reach, at the start of the campaign.

That said, a megadungeon does require some forethought, because an important feature of megadungeons is verticality, the connections between levels. Winding stairways, gaping shafts, and plunging crevasses allow adventurers to descend into the underworld; moreover, traps like chutes and elevators may send the explorers deeper than they plan or are prepared to go.

So - with apologies to recovering Stephen R Covey survivors - whether designing a megadungeon or planning for politics and intrigue, begin with the end in mind. In setting out the political players of the cape-and-sword game-world, plan for verticality, connections between the 'levels' of local, regional, national and international actors in the political sphere. Here's how this looks in my campaign, set in 17th century France; though the names and titles may change elsewhere - the French province is similar to the English shire, frex - the basic princples remain the same.

Local politics focuses on the villages, small towns, and estates of the countryside. The major players here are the local lord, the parish pastor and curate, the churchwarden - the lay leader of the spiritual community - abbots and priors, ministers in Huguenot communities, merchants in the towns, the bailiff of the royal courts, and various inspectors and other officials. In port towns, ship captains - including pirates and smugglers - may be important politically as well. Note that by this time the influence of the local lord is primarily economic rather than juridical; with the exception of the provinces which Louis XIV would add along the frontier with the Empire, serfdom is largely abolished and local magistrates - sénéchaux and viguiers - are primarily ceremonial. Confraternities - lay religious fraternities - in the parish and guilds in the small towns are the most common organizations to which members of the this community belong, and participation may be limited to the local elites. One of the common goals of local elites - and a source of conflict between them - is to rise into positions of regional influence.

Regional actors include the magistrates and their courts, city and fortress governors and their garrisons, regimental commanders and their officers, martial magistrates, tax collectors, titled nobles, knights-commander, the bourgeoisie, municipal burghers - consuls, capitouls, échevins - fleet commanders, canons and their colleges, bishops and their curias, intendants - a special magistrate with a royal commission - and the provincial governors and their lieutenants. In Flashing Blades, gentlemen's clubs - an anachronism adopted from En Garde! - salons, and academies in the larger cities are an important social outlet for forming political connections, as are confraternities and guilds once again. For most this is the highest level of political power to which they can aspire as social rank begins to weed out aspirants, so perogatives are assiduously guarded. Factions organized around community elites may strive for control of city councils, bishoprics and governorships.

National political players are the grands - the wealthiest nobles - and Princes of the Blood - those with a claim to the throne should the king not produce an heir - court ministers, courtiers and councillors, generals and marshals, admirals, cardinals, and the wealthiest bankers. Many national actors have access to the king, and may influence the policies of the realm; those closest to the monarch will jealously endeavour to exclude as many others as possible from the royal presence. Factions tend to coalesce around court figures - the king, the queen, the dowager, the princes, and the minister of state - and along lines of political philosophical divides.

International actors in the political sphere include the monarchs themselves, their ministers of state, and the ambassadors who act in their name, as well as cardinals, the wealthiest investors, and occasionally generals sent abroad to serve under foreign commanders. More problematic international actors are the princes, as involving themselves with foreign crowns threatens the stability of France; when the prince de Condé fled France for the Spanish Netherlands with his new bride, to avoid the amorous attention - and intention - of King Henri IV, the scandal was exacerbated by an heir to the French crown within the grasp of the Habsburgs. Political actors at the international level are most strongly movitated by grand strategy, but even petty disputes over precedence or etiquette between monarchs may become the source of political intrigue and maneuvering.

So, in rough outline, these are the levels of our political megadungeon. As with an actual megadungeon, it's not necessary at first to detail all of the possible political machinations which exists throughout the kingdom, but as non-player characters and their intrigues are developed, at any level, it helps to have a sense of how the actors fit into the larger scheme, and to plan for chutes and elevators to trap the unwary - for example, an adventurer in my campaign challenged a romantic rival to a duel, unaware that the rival was the nephew of a lieutenant of the Cardinal's Guard. As previously discussed with respect to clientage, a political actor's reach may extend across all levels - offers of patronage, for example, typically flow from national actors to regional actors, for example - so verticality should be considered from the beginning.

The other aspect of megadungeon planning applicable to the cape-and-sword political sphere is the idea of theme levels. Some dungeon masters are content with randomly generated funhouses or 'mythic underworlds' in which magic can be used to explain and justify the results, but many others prefer to give their dungeons some history and at least a hint of a nod to ecology. Theme levels are organized around a unifying principle, something like the Fungi Caverns, where myconids and vegepygmies vie for control of the 'Shroom-Womb, a cave deep with compost funneled in from upper levels of the dungeon, where the myconids and vegepygmies worship an otyugh as their goddess and seek her favor.

In the cape-and-sword political sphere, the unifying elements are factions. As mentioned above, factions may be organised around individuals - powerful grands, prelates, members of the royal family - or along philosophical or religious lines. Taking my cues from the history of the period, there are four basic political alignments which may contribute to the development of factions. Devout Catholics, the dévots favor alliances with the Catholic monarchs of Europe in order to combat the Protestant heresy in France and abroad. Dévots encourage close relations with Spain, Austria, and the papacy and reject support for England, the United Provinces, and German and Scandanavian Protestants. In domestic affairs, the dévots support the continuance of the nobility’s traditional priveleges and oppose absolutism and the rise of the bureaucratic robe nobility associated with the centralization of royal power.

Their rivals are the bon Français (literally "good French"), or politicals, who consider themselves patriots of France on equal measure with being good Catholics. The bon Français believe that supporting the king should be the primary concern of his subjects and that the greatest threat to the security of the crown, and by extension France, comes from Habsburg Spain and Austria. The bon Français accept alliances with Protestant powers in the service of protecting the crown against those foreign powers seeking hegemony over France and Europe.

Many of the dévots are ultramontanists as well. Ultramontanism is the Roman Catholic belief or doctrine that Papal authority supercedes that of local temporal and spiritual authorities, such as princes and bishops. "Ultramontane" means "beyond the mountains," specifically the Alps, and the original usage referred to a pope elected from outside Italy, but in 17th century France it refers to those who believe the powers and perogatives of the Pope exceed those of the king or the prelates of the Church in France. Ultramontanists strongly resist the concept of the absolute monarchy and of the civil authority of the state over the persons and institutions of the Church.

Ultramontanism is in turn opposed by gallicanism. Gallicanism is the belief or doctrine that the royal and civil authorities of France hold power over the French Church comparable to that of the Pope in Rome. Unlike the Anglicans in England, Gallicans do not reject the authority of the Church over temporal and ecclesiastical affairs altogether, but rather emphasize the role of the bishops, and the monarch and the civil authorities, in managing the affairs of the Church in France. The role of the Papacy in Gallicanism is one of 'first among equals.'

Factions in my campaign, then, represent a mix of the personal and philosophical. Cardinalists - Cardinal Richelieu's faction - tend to be gallicanist and bon Français in their politics, and pursue an agenda which both enriches their prelate patron and earns them a share in his largesse, and advances their goals of a powerful French monarchy able to resist both the Habsburgs and the Church by turns.

Like first-level dungeoneers taking their first tentative steps into the underworld, swashbucklers early in their careers are unlikely to be more than occasional pawns moved by the political actors of the setting; as such, it's not necessary to detail their intrigues beyond where their interests intersect with the adventurers. But as the swashbucklers become political players in their own right, then the 'lower levels' of the megadungeon should be prepared to receive them, and planning should begin, in broad strokes, from the outset of the campaign. These broad strokes - knowing who the political players are, and how they may organize themselves - also make it easier for the referee to improvise should the need arise.

Next, the source of conflicts which drive the political campaign.
Posted by Black Vulmea at 11:56 AM