I tend to see roleplaying games as very functional items. For example, I tend to write all over my game books - highlighting passages, penciling in margin notes, even the odd sketch or diagram. I don't care for a lot of artwork unless it illustrates something relevant to the rules - stuff like fancy borders or 'iconic characters' is pretty much lost on me. I like the words to be spelled correctly, I like the grammar to be correct, and please, give me a bloody index. I'm a man of simple tastes.

Which makes my latest game-purchase seem so amazingly decadent.

Last week I received a package from France - which excited a great deal of curiosity from the rest of the crew - containing Te Deum pour un massacre: le jeu de rôle des guerres de Religion, the roleplaying game of the 16th century French Wars of Religion, and all I got are two words.

Te Deum for a Massacre refers to the Saint Bartholomew's Day Massacre in 1572, during which thousands to tens of thousands of Huguenots - French Protestants - were cruelly murdered by Catholics in Paris and the rest of France with the tacit blessing of the king, Charles IX, and the connivance of the Queen-Mother, Catherine de' Medici and their allies, the Guise family. The massacre, which followed on the heels of the wedding of Henri de Navarre - who would become King Henri IV of France - and Marguerite de Valois, sister of the king, was not the beginning of the Wars of Religion, nor was it the end, but it is perhaps the most memorable event in the vast confessional bloodletting which gripped France in the 16th century.

Patrice Chéreau's 1994 movie La Reine Margot - released in the US as Queen Margot - luridly covers these events in all their blood-drenched horror. I have to imagine the movie came as something of a shock to American viewers expecting a romance - the French promotional posters featured a woman in a blood-soaked white dress, while the American video release depicted stars Isabelle Adjani and Vincent Perez, two of the most beautiful people in cinema, wrapped up together in a long red cloak. 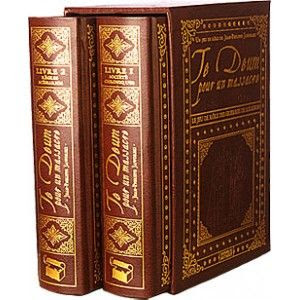 So anyway, the game.

Te Deum comes in two volumes, hardbound, digest-sized, in a slipcase. Both the books and the slipcase have a leatherette covering with embossed designs and artwork, featuring two duelists on one volume and two nobles with a prelate on the other, with the cover text in gold ink. They look and feel like they should contain the collected works of Rabelais, not a roleplaying game. The parchment-colored pages are a bit busy for my tastes, with intricate borders all around, but the pen-and-ink illustrations scattered through the books are skillfully rendered and, on a quick skim, seem intended to capture the flavor and style of the period for a modern audience.

The first volume is devoted to society, geography, and history of the 16th century (société, géographie, chroniques) and the second covers rules, characters, and adventures (règles, personnages, scénarios).

Oh, and tucked between the books in the slipcover? A folio of character sheets and a BOOKMARK!

I haven't had the time to really dig into the books yet - je parle français un petit peu, and it's going to take a fair number of visits to WordReference to make sure I'm understanding everything I'm reading - but if the rules get the same attention as the presentation, it looks very promising indeed.

Even if they did leave out the bloody index.
Posted by Black Vulmea at 2:15 AM